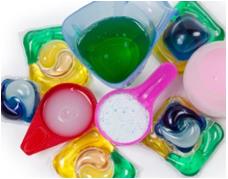 Surfactants can act as cleansing agents (or detergents) which are used to remove dirt, including dust, stains, bad smells, and clutter on surfaces in dilute solution with water. According to their chemistry, they can be classified in non-ionic, anionic, or cationic surfactants. Generally, cleansing agents in shampoos, hand-dishwashing products, and laundry cleaning products are anionic and non-ionic surfactants, while cationic surfactants may be present in automatic dishwashing powders, fabric softeners, some hair products, sanitizers, and disinfectants.

In brief, a surfactant is an amphipathic compound in cleaners that interacts with both water and soil to help them mix together and have the soil wash away with the water. When referring to cleaning, soil refers to anything that is making the object dirty and it can be dirt, oil, food, etc. 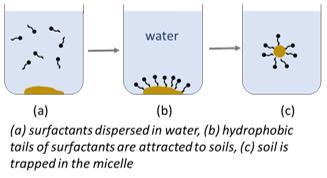 When there are a sufficient amount of surfactant molecules present in a solution, they can combine together to form structures called micelles which can act as a unit to remove the soils. The hydrophobic tails of surfactants are attracted to soils and surround them, while the hydrophilic heads pull the surrounded soils off the surface and into the cleaning solution. Then the micelles reform with the tails suspending the soil in the center of the structure. Now that the soil is trapped in the micelle and the micelle is suspended in water, it is easy to wash the soil way.

Cationic agents, positively charged, have lower detergent properties than anionic surfactants, and they may be used as antimicrobial preservatives rather than as cleansing agents. Here, we mainly introduced the other three types of common surfactants. 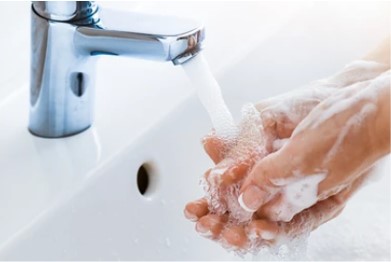 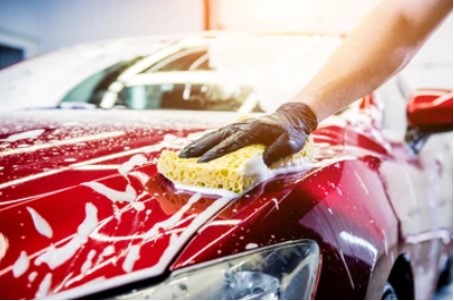 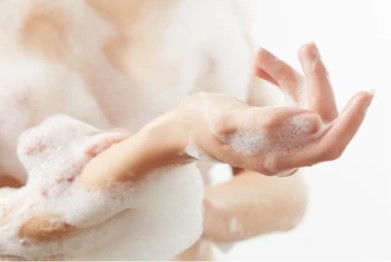 Particularly, one of the most common cleansing agents among this group is cocamidopropyl betaine. As its moderate irritancy potential, cocamidopropyl betaine is increasingly used in shampoos and liquid cleansers since its introduction in the 1970s. This surfactant is also considered as a viscosity builder and foam booster.

The reasons for this wide utilzation of amphoteric surfactants are their good cleansing power and lather characteristics, a moderate antimicrobial activity, the lack of toxicity and compatibility with different pHs, in spite of its nonnegligible final cost.

For example, sodium lauryl sulphate (SLS) is a well-known alkyl sulphate which is widely used in personal care products as cleansing agent. Sodium laureth sulphate (SLES) is the favourite primary surfactant in body wash/shower gel and shampoo, because of its good cleansing power and its low cost, even if it has some irritant potential. Actually, new mild cleansers, such as sodium cocoyl isethionate, are marketed.

According to recent studies, alkyl sulphates and alkyl sulfosuccinates have the highest cleansing power, followed by very expensive acyl glutamate and triethanolamine soaps.

Alkyl polyglucosides, such as coco glucoside, lauryl glucoside, decyl glucoside, are among the most common used non-ionic surfactants. Another common non-ionic agent is cocamide DEA (coconut diethanolamide) which is widely used in personal care products.

It is commonly considered that non-ionic agents are the lowest irritants to skin among the different types of surfactants. And non-ionic surfactants alter the cutaneous lipid layer more than anionics, because they can solubilize fatty acids and cholesterol in skin. While their cleansing power and lather characteristics are quite weak, and they are also the most expensive surfactants.

Furthermore, the members of this group have a relatively low potential toxicity and they are considered the gentlest surfactants.