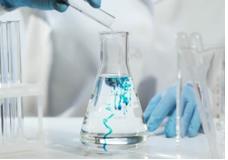 Dispersion is the process where a non-soluble solid is suspended in a liquid and stabilized against settling, separation, agglomeration or aggregation. A dispersing agent (dispersant) is a substance, that is added to a suspension of solid or liquid particles in a liquid to improve dispersion stability by improving the separation of the particles and preventing their settling or clumping. A dispersing agent is a form of surfactant. The difference between dispersant and surfactant is that a dispersant improves the separation of particles in a suspension whereas a surfactant is a substance that can lower the surface tension between two phases of matter.

In a suspension, particles always attract each other because of Van der Waals forces. Thus, it is requisite to separate the particles from each other in the dispersion process by using a dispersing agent. Dispersing surfactants contain molecules with a water-compatible ("hydrophilic") head and an oil-compatible ("lipophilic") tail. It is because of the special structure that they would adsorb at the solid-liquid interface and assure repulsion between the particles. The water-compatible hydrophilic part protrudes into the water, while the oil-compatible lipophilic tail protrudes into the particles. Due to the electrostatic repulsion and/or steric hindrance, the particles would be evenly dispersed into the liquid. The repulsive forces, resulting from the dispersing agents, must be stronger than the attractive Van der Waals forces. The diagram of dispersion is as below.

Fig. 1 Dispersion of particles in a liquid

The stability of the dispersed particles is important, since they can flocculate afterwards. There are two main ways to maintain the particles spacing, electrostatic repulsion and/or steric hindrance.

Classic colloidal science explains electrostatic stabilization in terms of an electrical double-layer. A charge is generated on the particle surface, and a more diffuse cloud of oppositely charged ions develops around it. As two particles approach each other the charge effectively provides a barrier to closer particle interactions. Stabilization increases along with the thickness of this layer.

Steric hindrance relies on the adsorption of a layer of surfactant chains on the surface of particles. As particles approach each other these adsorbed organic chains intermingle, and they would lose a degree of freedom. This loss of freedom is expressed, in thermodynamic terms, as a reduction in entropy, which is unfavorable and provides the necessary barrier to prevent further attraction. 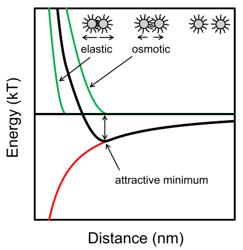